The UAE Ranked Number One In The Arab World
Category: World News 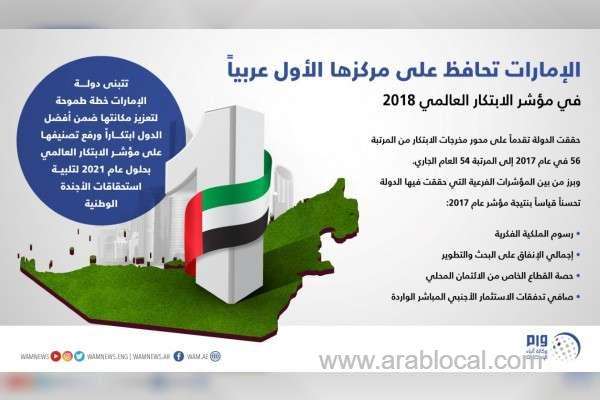 The UAE remained in good standing at this year’s edition of the Global Innovation Index (GII) as it ranked number one in the Arab World and ranked 38th globally and 24th in the innovation input pillar. In addition, the country also demonstrated an increase in its innovation output pillar from 56th in 2017 to 54th this year.

The positive positioning across these indices reflects the significant improvements in knowledge and technology outputs, business sophistication, market sophistication and infrastructure. For example, these pillars include increases in indicators such as government online services, intensity of local competition, gross expenditure on research and development financed by business and foreign direct investments net outflows.

The country is now implementing a strategic roadmap that looks towards improving both its short-term results in the GII by the year 2021 while also enhancing long-term results. The objective is to position the UAE as one of the top 10 innovation leaders in the world. Some of the initiatives being rolled out include the move to unlock intellectual property attractiveness; the promotion of a unified network aimed at encouraging fundamental research collaboration between universities, private sector, and government; identifying, connecting and tracking the impact made by these innovation-based initiatives and the move to bolster the financing of innovation for all UAE companies via venture capital.

The index, which is an annual ranking of countries by their capacity for, and success in, innovation, measures the innovation-related performance of 126 countries and economies representing the vast proportion of the global Gross Domestic Product (GDP). This year's index was calculated based on detailed measures of innovation inputs and outputs – including 80 indicators providing insights on the various areas of innovation, most notably institutions, human capital & research, infrastructure, market sophistication, business sophistication, knowledge & technology outputs, and creative outputs. The GII is commonly used by corporate and government officials to compare countries by their level of innovation and aims to provide a measure for assessing and improving innovation and helping promote its role as a catalyst for growth and prosperity.

Sultan bin Saeed Al Mansouri, Minister of Economy, said that the UAE's position across the Arab World can be attributed to last year's score growth rate of 10 percent, which was one of the highest percentage score growth rates among all countries in the GII.

He said, "We are continuing to lead the area in the field on innovation as the UAE sustained its performance in this year's Global Innovation Index. This position is a testament to our continuing efforts towards investing in talent and maintaining strong partnerships between the government and the private sector. Our solid global innovation performance has given us the confidence to further embark on an ambitious innovation program with short-term initiatives to boost our global innovation ranking and longer-term transformational initiatives to become among the top global innovation leaders. With this in mind, newer initiatives will be rolled out with the chief goal of seamlessly connecting all of the major innovation players while also urging the further expansion of fundamental research and linking it with finance. The country is now tapping into the potential of SMEs by encouraging innovation through our Young Innovative Companies initiative, which offers a one-stop-shop for access to IP registration and facilitates access to funding for high potential ventures."

Meanwhile, Reem bint Ibrahim Al Hashemy, Minister of State for International Cooperation and Chairperson of the Board of the Federal Competitiveness and Statistics Authority, said, "We are continuously working on how we can improve and enhance the way we measure innovation in the UAE. This step is fundamental to identify, connect and track innovation at all levels in the country today."

Mubarak Rashed Al Mansoori, the UAE Central Bank Governor, highlighted that: "The Central Bank is constantly working to ensure that the financial regulatory environment enables innovation whilst at the same time ensuring a robust and stable financial system. Specifically, this concerns areas such as digital payments, SMEs and a new national payments strategy."

In addition to timely and accurate data collection measures, initiatives tackling the different elements of the ecosystem have been and continue to be implemented by the strategic members of the GII team.

With regards to the Labor component of the innovation ecosystem, particularly National labor, Nasser Al Hamli, Minister of Human Resources and Emiratization, stressed: "The Ministry of Human Resources and Emiratization is supporting the development of Emirati-led innovation through country wide and sectorial initiatives offering new opportunities to the private sector".

Obaid Al Tayer, Minister of State for Financial Affairs, said: "The Ministry of Finance is actively engaged in unlocking the innovation potential of the UAE through innovation financing and policy creation to support the innovation ecosystem in the UAE." Finally, the financing efforts exerted by the Ministry of Finance have been complemented by the measures taken by the Securities and Commodities Authority to boost the Venture Capital ecosystem in the UAE.'' Dr. Obaid Al Zaabi, Chief Executive Office of the Securities and Commodities Authority, stated that: "The Securities and Commodities Authority of the UAE remains dedicated to the development of the Venture Capital eco-system in the UAE and is collaborating closely with the Ministry of Economy and other key innovation stakeholders on the establishment of a robust regulation environment."

The Global Innovation Index is based on both innovation input and output sub-indices. Converting innovative inputs to higher innovative outputs is fundamental for improving the UAE’s performance. This is what the UAE has consistently achieved: Over the period 2015-2018, the UAE displayed a strong and steady performance in innovation inputs, ranking constantly in the top 25: 25th in the 2015-2016 years and 23rd in 2017. This year, the UAE maintained this stronghold in inputs by ranking 24th. Ranking increases in specific pillars reflect the efforts of the UAE. For example, the continuous increase in output since 2015 was driven by the Knowledge and Technology Outputs that went up this year from 71 to 53. In addition, these efforts were achieved in the Input sub-index through better Business Sophistication performance, increasing from 25 to 23, Market Sophistication with an increase from 33 to 31 and Infrastructure with an increase from 29 to 28.

Abdullah Al Shamsi, Assistant Undersecretary for Industrial Affairs in the Ministry of Economy, concluded, "These are exciting times for innovation in the UAE as we are constantly unlocking the potential of future innovation through initiatives like the Young Innovative Companies program – an initiative that helps connect all key innovation stakeholders in the UAE."