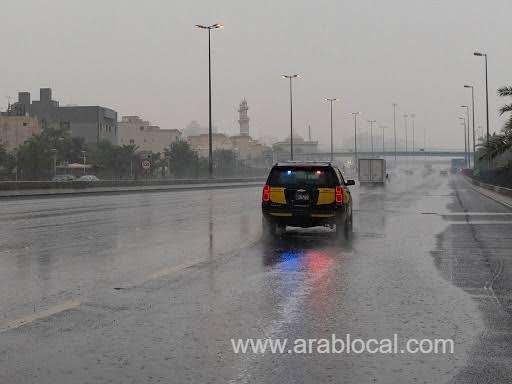 In the eastern and southern parts of the country, the National Center of Meteorology (NCM) issued a weather alert indicating cloudy weather. It is also possible to experience thunderstorms and lightning in these areas at times.

Residents and motorists in these areas have been warned to use caution on the roads. It is also advised that residents avoid visiting wadis, valleys, and flood-prone areas.

After rain lashed parts of the UAE on Monday, the Ministry of Interior urged the public to exercise caution and heed safety alerts.

Flood damage was reported in many areas of Fujairah, Ras Al Khaimah, and Sharjah caused by unusually heavy rains.

According to the ministry, drivers should maintain caution on the road on Monday. Residents in the eastern and western regions of the country should follow safety instructions due to rain, winds, thunder, and lightning.

The current weather pattern is a result of the vibrational movement of the ITCZ (Intertropical Convergence Zone) that is moving north then south across the Arabian peninsula.

In combination with the increase in temperatures during the daytime, surface and upper-level troughs are moving from the south to the north of the country. Rainy convective clouds will form over different parts of the country, particularly eastwards and southwards, covering Al Dhafra. Thunderstorms will be possible.

After the troughs retreat to the south again, the atmospheric phenomena over the area and the country will weaken. This means less rain and more sunshine.

A mixture of partly cloudy and cloudy conditions with rainy convective clouds forming with varying intensities over scattered areas, especially over eastern, southern, and western areas, starting in the afternoon until the beginning of the night.

At times, fresh to strong winds blowing dust and sandstorms reduce horizontal visibility due to southeasterly, northeasterly, and northwesterly winds.