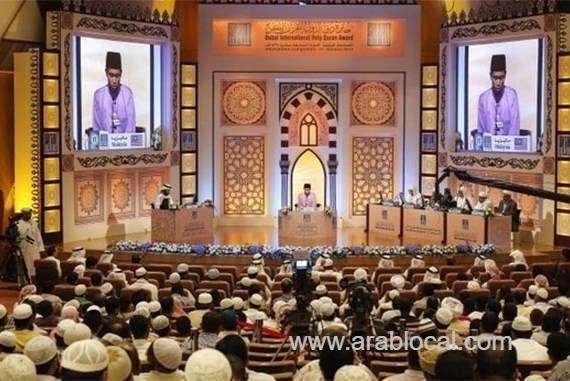 The top Quran memoriser was Ahmed Burhan Mohamed from the US, who won a Dh250,000 prize
After 12 straight nights of tests, the Dubai International Holy Quran Award (Dihqa) announced, late on Tuesday night, the top 10 winners of the 22nd edition - the 'Edition of Zayed' - at the Cultural and Scientific Association, Al Mamzar.

Ahmed Burhan Mohamed, a 16-year-old who represented the US in the global award, won the top position of the 'International Quran Competition', apart from the Dh250,000 prize money. 20-year-old Hamzah Al Basheer Salim Harshah, who represented Libya, ranked second in the 22nd edition of the award, while Mohamed Maaref of Tunisia shared the second position with him for having the same scores.

The contestants, who scored (80 per cent) and above, were rewarded with Dh30,000 each while those scoring (70-79 per cent), received Dh25,000 each, and those scoring less than (70 per cent) got Dh20,000 each. Appreciation certificates and cash prizes were given away to other participants.

Ibrahim Mohammed Bu Melha, adviser to the Ruler of Dubai for Cultural and Humanitarian Affairs and Head of the Dihqa organising committee, said the award - which started with two sections in 1997 - has branched out to 14 categories.

"The award has seen quantum leaps and developments over 22 years that it attracted up to unprecedented 104 contestants this year."

The Award has further paid accolades to many Islamic personalities, including leaders, scholars and entities, in appreciation to their dedication and remarkable services to Islam and Muslims, he stated. "The Imam and Preacher of the Prophet's Holy Mosque, Sheikh Dr. Ali bin Abdurrahman Al Huzaifi, is the Islamic Personality of the 22nd edition for his relentless effort in serving Islam and Muslims all over the world."

Addressing the winners, Bu Melha advised them to implement whatever they memorised and turn it into a reality. "Mull over Quran verses, reflect and observe its ethics and principles, set a shiny example for others, and feature the tolerance of Islam and its refined teachings to mercifully and wisely call for Islam."

"Initially, 104 memorisers were confirmed for this award, but only 96 could make it and clear the initial qualifying tests, while four were disqualified for poor performance, and six apologised for not being able to travel to Dubai."

This edition is the best of all editions in terms of the number of competitors whose performance is outstanding after being nominated from among best memorisers in their home countries, he added.

"Only competent memorisers appear in public," he said. "All contestants need to live the verses they are reciting to better reflect them and get the audience involved, particularly when reciting a question or giving an answer during recitation."